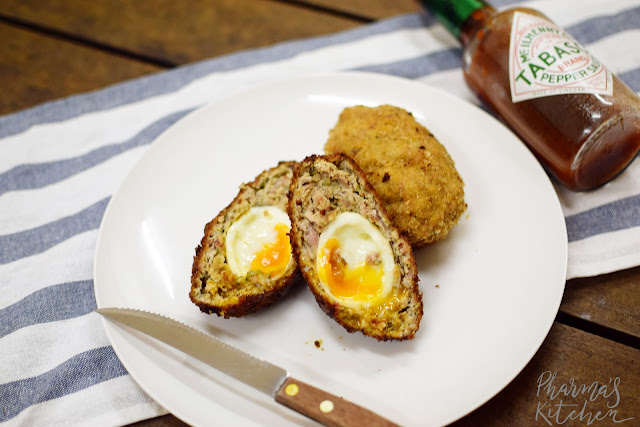 Scotch egg is essentially an egg encapsulated in meat/sausages in the shape of a bigger egg. Scotch eggs are usually served in local pubs in the United Kingdom. Unfortunately, when I was studying in the U.K, I did not get a chance to try it there. My usual order at the pub at the time was a curry and a pint. I should have been more attentive and thorough going through the menu. Haha.

It is unclear what is the actual origin story of the Scotch Egg. London department store, Fortnum & Mason claimed they invented it for rich couch travelers in 1738. There are also accounts that Scotch eggs evolved from an Indian dish, the Nargisi Kofta. Another theory mentioned that Scotch Eggs are essentially a “poor” man’s lunch as it is made from egg and leftover meats and easy to carry around. 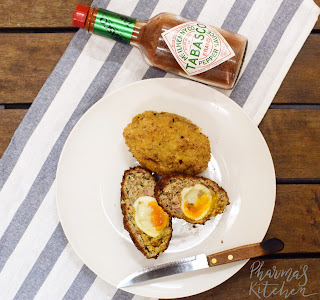 Regardless it’s origin, Scotch Eggs has been around for a long time. And food that has been around for so long must be something good, so good that it was enjoyed and passed down over the past few centuries. What else does this picnic/pub food remind me about? It reminds me of breakfast, because it has egg, sausages and elements of bread in it.

It can be prepared by baking it in the oven or frying them in the fryer. Some prefer their egg to be hard-boiled in their Scotch Egg, but Joanna and I prefer our Scotch eggs still a little runny, like a soft boiled egg. Believe me, had spend a lot of time of this one, just to get the egg right. Had a number of failed attempt, so had to increase my protein on those days to ingest the eggs from failed attempts. Thankfully, we have a furkid at home to help me with some of my failed eggs. This dish is definitely fits in as a starter or picnic food during an outing with family or friends. It is truly, delicious food in one bite.

This one is tricky. My failed attempts are all from the boiling process. This describes the process I found most efficient for me to prepare perfectly smooth eggs that still has a runny center.

1. Bring a pot of water to boil.
2. Into the boiling water, place 3 large eggs into the pot and cover for 3 minutes and 40 seconds. Note that is fire heating the water is still set on high.
3. After 3 minutes and 40 seconds, remove the eggs and place them immediately into the ice-cold water bath and place the bath into the freezer for at least 5 minutes.
4. After 5 minutes in the freezer, remove the eggs from the freezer and peel the eggs carefully.
5. After peeling, lightly cover the eggs with some bread flour and place each egg into a cup and put them back into the freezer while you prepare the sausage meat. (in our kitchen, I placed each egg into a silicone baking cups)

1. Place the sage leaves into a pestle and mortar. Add a pinch of salt and slowly grind the sage leaves into a paste. Place the paste aside for incorporation into the sausage mixture later.
2. Places the slices of bacon into a food processor and pulse it until the bacon is broken down coarsely.
3. In a large mixing bowl, mix the 350g of minced pork with the bacon, sage paste and 2 tablespoons of bread and milk mixture (mixture is prepared a night before by soaking bread in equal amounts of milk). Also to the sausage mix, add 2 teaspoons of BBQ powder, 1 teaspoon of paprika mix and some salt and pepper to taste.
4. Before encapsulating the eggs, taste the sausage mix by cooking a pinch of meat on the pan. Season the sausage mix again with salt and pepper if the meat are still unseasoned.
5. Seperate the sausage mix into 3 equal portions.
6. First, form a ball from the portion of sausage mix and flatten the mix into patty sized.
7. Remove the eggs from fridge, to each portion of sausage mix, place the egg in the middle. Mold the sausage mix to the egg.
8. Using both hands, slowly encapsulate the egg with meat by moving your hands up and down until the egg is completed covered with the sausage mix. Repeat until all 3 eggs are encapsulated.
9. For the coating, prepare a bowl of flour, egg-wash (2 eggs, beaten), and breadcrumbs each.
10. First, coat the Scotch egg with flour, then into the egg-wash and finally coat it with breadcrumbs.
11. Heat up a pot oil and on medium heat, fry the Scotch eggs for about 5-7 minutes until they are golden brown.
12. Remove from oil and dry with kitchen towel.
13. Serve the eggs hot.

The way Joanna and I like to enjoy our Scotch eggs is to cut them into quarters and drizzle a bit of Hot/Tabasco sauce onto them and indulge in them slowly. The crispy outer layer of the bread crumbs, coupled with the sage infused sausage and the soft center egg topped with Tabasco will definitely leave you wanting for more of it.

Do try this recipe and I hope you guys like it. Enjoy. 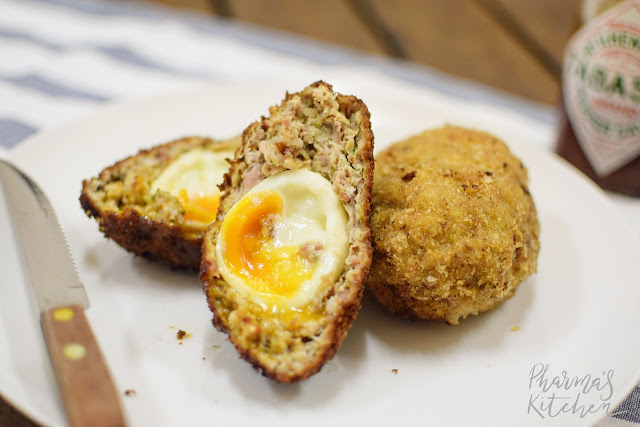 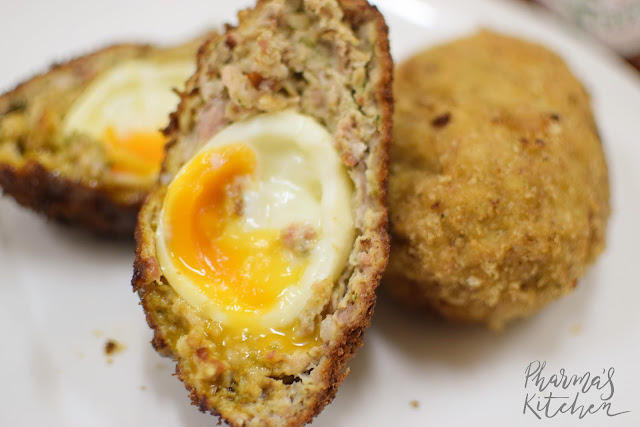